In 2006 Donetsk Forged Figures Park celebrated its 5th anniversary. Since 2001 62 works have been created by joint efforts of blacksmiths from 15 Ukrainian cities and installed in the Park.

THE FORGED FIGURES PARK IS THE PLACE WHERE FRIENDS MEET

In 2004 the Ukrainian Gefest blacksmiths enterprise founded The Magazine of Metal. And it was a crucial point in the Forged Figures Park foundation and development of the festival of the same name. By efforts of the magazine’s staff blacksmiths from the remotest parts of Ukraine got to know about each other and Donetsk blacksmiths art festival and took up the initiative to establish a creative union.

The same year the Forged Figures Park festival became All-Ukrainian and the first joint work of blacksmiths from 12 Ukrainian regions The Sweethearts Pavilion appeared. In 2005 The Zodiac Signs Alley was founded. The joint blacksmiths creative work was scaled up (12 one-and-a-half-meter-high works were made by the masters from Ivano-Frankovsk, Kiev, Kirovograd region and Donetsk) and the quality of forging was improved.

In 2006 the 8th Forged Figures Park blacksmiths art festival became international. Among the participants were such famous masters of blacksmiths art from Russia and Holland as Aleksandr Romanov and Ivan Monastyrskiy (Ulianovsk), Vyacheslav Korostylev (Mozhaysk) and Boris Falin (Moscow), Huub Sensen, Franz Yanssen and Shartela Santjago (Netherlands). The status of the festival is growing and Donetsk, therefore, is entering the list of blacksmithing centers in the world.

The Magazine of Metal is known as the promoter of blacksmiths culture in Ukraine and abroad. In 2006 its editorial staff invited to the Donbass capital their new friends acquired at the blacksmiths festivals in Ivan-Frankovsk, Ulianovsk, Sudak and towns of the Moscow area. Blacksmiths from 20 cities and parts of Europe met together to feel the mood of the grand holiday organized under the aegis of our general sponsor the Alchevsk Iron and Steel Works international public company and the Donetsk City Council.

We are also very grateful to the following partners of the festival: the general promoter Ukraina broadcasting company, the Kremen insurance company, the Leman Ukraina company, the Byttechnika distribution network, the 100% trademark, the Donsplav company, the Ispanskiy Dvorik (Spanish Yard) hotel-restaurant and the Classnoe Radio promoter. Thanks to the allocated funds Donetsk impressed festival guests with its hospitality again and everybody who had participated in that blacksmiths event was awarded with energy of creation and unforgettable memories. 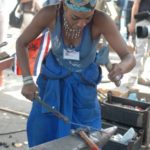 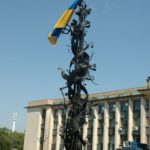 For example, the opening of the Masters’ Bunch! It is an implementation of grandiose potential of the international blacksmiths unity. The masters’ Bunch is a five-meter-high spiral, decorated with forged works by more than 200 masters of blacksmiths art from 17 countries all over the world. It was made in Ivano-Frankovsk at the festival in May and presented to Donetsk in honour of the 5th anniversary of the Forged Figures Park.

Hearts of the festival guests were won by Dmitriy Khaladzhi, the strong man from Komsomolsk and the record-holder of the Guinness World Record. There was an anvil placed on his chest and a leaf of the laurel wreath forged on it. The number was unique as during the process of forging Dmitriy had been lying on the ‘carpet’ of … nails with their points touching his back!

Championship participants were to make an artistic composition from the elements forged in course of the blacksmiths exercises. The winner of this competition was Leonid Krasitskiy (Kramatorsk). Vitaliy Komon’ko (Ternopol) took the second place and Sergey Kaspruk (Donetsk) was the third.

It should be noted that when Leonid Krasitskiy’s hands were slightly injured the Kremen championship official insurer paid him the adequate compensation at once.

We are cordially thankful to everybody who has supported the Forged Figures Park – 2006 festival and taken part in the blacksmiths show!